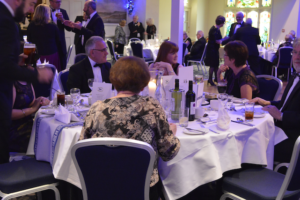 The club’s annual dinner dance took place at the George Hotel on the 26th November. It was great to see everyone scrubbed up, though one or two of the sailing fraternity were hard to recognise without their oilies on!

It was also really good to see our overseas contingent in attendance, and the lifeboat crew were also extremely welcome, providing professional backup in case anyone had trouble navigating the waterfront afterwards. 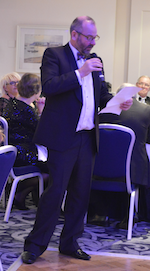 The sailing captain gave a very thorough and welcome summary of the sailing season, which included the annual prize giving, and all the winners were present at the dinner. This year’s winners were:

Many congratulations to all the winners.

The meal was well received and this was followed by the prize raffle, though some eyebrows were raised when it transpired that the raffle system had somehow benefitted the families and friends of those drawing the tickets.  The President has assured the website editor that this was a complete coincidence, and that the contents of this brown envelope should explain everything.  The editor is now completely happy there were no issues with the draw.

All in all, a very enjoyable evening but with only around 50 attendees we barely broke even on the night.  To ensure the dinner dance continues in future years, we will need more of you to come.  It’s a really fun event which gives members a chance to chat about the year just past and the year to come, so put next year’s event in your diary now:

This site uses Akismet to reduce spam. Learn how your comment data is processed.

Do you shop online at Amazon? Use this link to get a free donation for the Club every time - it costs you nothing!

If you shop almost anywhere else online, use this link to shop via easyfundraising - the Club gets a small boost and it costs you nothing!